The Inventor and the Entrepreneur 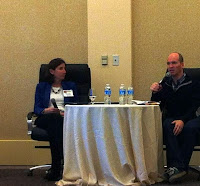 In the middle of our last day of visits in the valley we were visited by Ben Horowitz of Andreessen Horowitz.

Ben is the rare VC that has maintained very close contact with his engineering roots to maintain an incredibly detailed perspectives on his ventures. He also reveled in his position as a engineer who has consistently been in a position of business leadership. From that perspective here are some great takeaways from the discussion: