Ever wondered what the going rate for seed stage valuations is?  AngelList just launched an fun tool that easily lets you browse the valuation distribution for seed stage only investments: https://angel.co/valuations 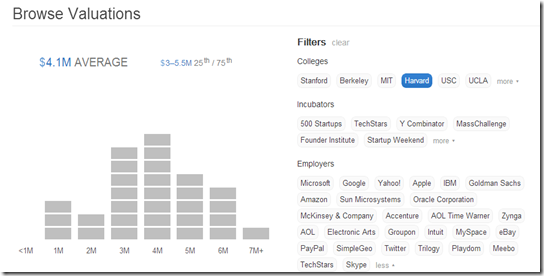 This is especially useful, since at the seed stage, company valuation is much more dependent on founder credentials (you!) than at later stages (traction/evidence takes precedence).

The first thing I did was take a look at how my background maps to valuations.  The big surprise was that the valuations in Cambridge were almost a million dollars lower than those in Silicon Valley – further stark evidence that valuations are relatively depressed outside the Valley (fundraising road trip anyone?).  My full list for BuildAFlock is as follows:

I’m not sure how much faith to put behind the statistical mean here, but I do like the fact that this at least provides a range.  And, if nothing else browsing the numbers while thinking about BuildAFlock as a $3.8M company is a ton of fun!  What’s your number?